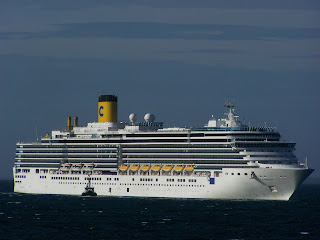 The local pilot boards Costa Luminosa on her final approach to Lerwick early this morning. The 2009 built Italian registered liner was on her maiden call to Shetland having sailed down from Reykjavik in Iceland. 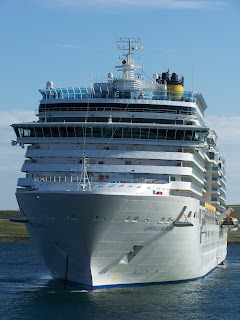 With the starboard anchor dropped the Luminosa starts to swing to windward as the anchor grips. The sunny first part of the day gave way to showery rain later, however this was a favourable day to visit after the poor weather recently.
Luminosa is not scheduled to visit Shetland in 2011, however there will be one visit from a Costa liner next summer in the shape of the Costa Pacifica. Coincidentally she was named in a lavish ceremony in Genoa at the same time as Luminosa earlier in the year in Costa cruises first ever joint naming of two liners at the same time.
Posted by trickyboat at 13:44

Photo of the day 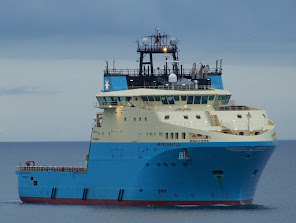 Shetland and the sea go together from the early days of Norse rule. The islands rich and diverse culture ensures an unique way of life.

Shipping around these shores varies dramatically. There's a mix of vessels from the oil industry, cargo, ferries, sail, through to the fishing fleet from inshore to it's pelagic industry.
Add to the mix cruise liners, & visiting yachts in summer, you get a sense of what Shetland is all about.

Ports vary to from Sullom Voe europe's biggest oil terminal, to tranquil Burravoe on the island of Yell.
Scalloway harbour on Shetland's westside also caters for a wide range of ships, or perhaps maybe North Haven in Fair Isle is more your thing?.

With a daily updated list of what vessels are in Lerwick, along with photos and documentation i hope you find this blog informative and interesting.